Five minutes, about the time it takes to coddle an egg.

Hello and welcome to this week’s edition of Table Talk, our opportunity to celebrate those sometimes wonderful, always meandering conversations that characterise dinner tables the world over.

📖 Who Knew That Was The Story Behind?! 📖

Anyone who has ever written a rambling piece of prose will tell you that where they ended up was often not where they began. Setting out to explore the history of barbecuing food, I quickly realised what I had got myself in for…

Firstly, barbecue has a capital B in the US. It’s a cuisine in its own right, one as central to American culture as the very stars and stripes that populate their flag, and it’s taken very, very seriously. Contrast this with us here in the UK, where we often refer to the or a barbecue, its mere mention inducing groans from millions of children across the country throughout the summer as they begin the build up to eating a few charred sausages and something that once looked like a corn on the cob. Expanding our horizons, Korean barbecue typically entails thin slices of pork served alongside rice, famous Argentinian asados house hunks of meat covered with nothing more than a pinch of salt as they’re slowly roasted into something truly unique, and no South African gathering is complete without a braai the size of a two bed semi. 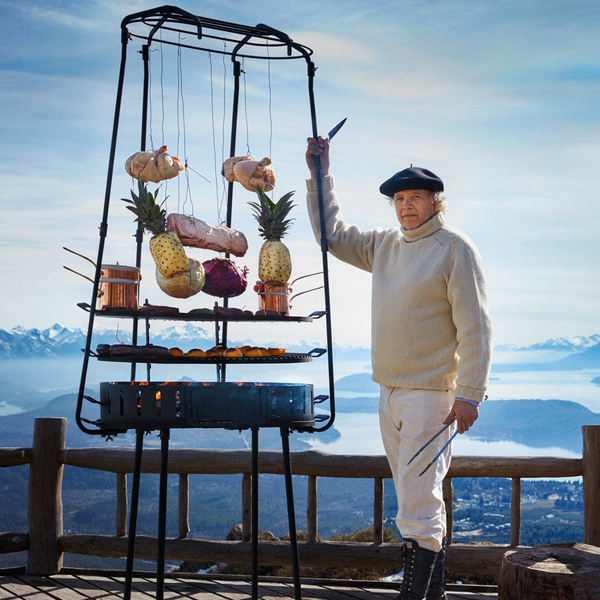 Try wrestling control of the barbecue tongs from Francis Mallmann...

If we’ve chuckled previously at the fact that the history of almost every dish ever covered in Table Talk began in Greek or Roman times, there’s absolutely no point in even trying to suggest anything other than the fact that barbecues have been around since the dawn of time. Men and women have gathered around fires, talked nonsense, feigned understanding and overcooked food since time immemorial. That is an indisputable fact. Period, as we might say if we were huddled around a smoker in Louisiana right now…

The origin of the word is reputed to stem from the word barbacoa, a Taino word for the wooden structures from which meat was hung over a fire (Taino being a now-extinct language spoken across large swathes of the Caribbean). That’s about the last thing that anyone agrees on…

From there, things have diverged enormously - those in the Caribbean focus on basting and marinating meats in sauces prior to cooking, whilst those in the US put their faith in rubs (referring to sauces as “wet rubs”) that consist of salts, spices and herbs. In many cultures, barbecue restaurants form the backbone of the culinary landscape, as common as curry houses or chippies in Britain.

Whilst it might be dispiriting to realise that we’ve been doing it wrong all these years - “Most Britons, I think, simply don’t get barbecues. They use them as ordinary cookers transplanted into the garden…But the point about barbecuing is that it’s a different kind of cooking altogether” - let’s instead take inspiration from those further afield who view barbecue as an artform and a home for experimentation. As summer approaches, let’s do all that and more, but equally, do be sure to leave a few sausages on a little too long - you never know, someone might miss them.

By now, most of you will know that we stand for openness and inclusion here at Wednesday’s Domaine. We want to make sure that everyone seated around the table is on equal footing, whether that’s down to their decision to drink or their ability to understand what the hell someone is talking about when it comes to “second fill” in winemaking.

Instead of exploring the origins of certain grapes or viniculture vocabulary, let’s use today to cover some fun facts that pair perfectly with lazy afternoons and long conversations in the garden this weekend…

Bataille des Vins in full flow back in 1224

Evidence of wine production has been found as far back as 6,000 BC in Persia.
In 1224, the French king organised the “Bataille des Vins” - the world’s first wine competition, with Cyprus coming out as the winner.

Between 1703 and 1860, tariffs restricted French wine imports into the UK and encouraged those from Portugal instead, spurring the British love of port.
In evidence of history coming full circle, inconsistent glass-blowing techniques made it common for people to bring their own bottles when purchasing wine. It wasn’t until the 18/19th Century that this changed and longer, flatter bottles were developed, aiding both storage and consumption.

As ever, we’ve covered some serious ground this week. If that’s tickled your fancy and you’re looking to continue on whilst you await news of our own launch, check out the links below for some incredible stories from the world of wine:

Thank you for reading, until next week,